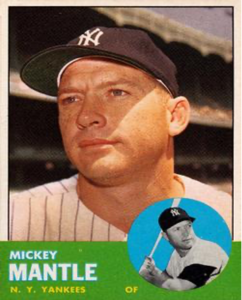 1964. The Bronx. At 11 years old, I had a baseball card collection with over two hundred fifty trading cards I kept in an A&P grocery cardboard box under the bed. My cards were alphabetically organized by baseball team, each team wrapped with a thick rubber band. I was focused on collecting Mickey Mantle cards, the hardest ones to come by in bubble gum packs you bought at the corner candy store. Mickey Mantle was my favorite player. I had a crush on him. He was the star Yankee, won the MVP award and played at the stadium on 161st and Jerome Avenue, five blocks from where I lived.

A chubby buck-toothed kid who lived on my block taught me how to flip baseball cards. I practiced for hours at a time, like a maniac perfecting the turn of the wrist to achieve my goal, which I neared to a 99% success rate. If you flipped the card in just the right way and it landed face-up but your opponent’s card landed face-down, you’d win their card. If you both had the same result, you’d do it over and over until one landed face-up and one landed face-down. And so, on the crumbling white stone stoop outside our Bronx apartment building I flipped to win Mickey Mantle baseball cards from pimply boys bursting with puberty and from bullies thinking the stupid girl has no idea what she’s doing.

But I did!
In a matter of a couple of months, I became well-known as the premiere baseball card flipper in my mid-Bronx neighborhood. I had the perfect moves with my wrist and the unrelenting will to win. Each time before I’d flip the card, I’d visualize it landing face up, see the front of the card clearly in my mind’s eye, and then flick that wrist, fast, with the skill of a pro. I honestly didn’t know any other ‘girl’ card flippers. I had broken my first glass ceiling at 11 years old. A gambler, a ‘girl’ gambler!

When Bobby Schwartz, the boy I had a crush on since 3rd grade and was now in my 4th grade, stopped me outside school and asked if I’d like to flip his Mickey Mantle cards for my Roger Maris cards, I accepted the challenge. Had he heard about my great reputation? I hadn’t seen him watching me before. We planned to meet on the stoop outside my apartment building at 3:30. He lived just across the street.

I raced home to put on my best white peasant blouse and my new navy blue capri pants. My younger 10-year-old brother, Ronnie knew something was up by the way I gazed in the hallway mirror at my clothes and brushed my hair with a smile on my face before picking up the cardboard box full of baseball cards and carrying it outside our building.

Bobby was already sitting there on the stoop, on the top step, his floppy blonde hair shimmering in the hot June sun. He wore a red and white checkered shirt and blue jeans with cuffs. His light blue eyes opened wide when he noticed the large box in my hands. I thought I saw him peek down my white blouse when I bent over to place the box down on the chipped top step; “How many Mantles you got with you?” I asked, sitting down next to him, exaggerating my dimples with a grin.

“Three,” he said; “But I brought some other good ones. Whitey Fords and Elston Howards.”

I shook my head, “Nope, not interested. I only want to play for Mickey Mantles.” I pretended not to notice the way his reddish-brown freckles sprinkled over his perfect upturned nose and across the smooth skin on his cheeks. “Let’s do a practice first,” I said. Was he good?

He nodded; “I heard you’re something else for a girl but I’ve never seen you flip.” He picked up a Mickey Mantle card, flicked his wrist and flipped it, then quickly flipped a second one. Both cards landed face-down. He didn’t seem to have the flair or the ability. Did he know the rules for flipping? He certainly doesn’t have the right form. “I was just fooling you,” he laughed, and shrugged his shoulders. “You’ll see. I’m really good. Let’s see your practice,” he said.

I held the Roger Maris card in my hand in the readied position, at the edges between three fingertips, my middle finger, my index finger, and my thumb, careful to put just enough gentle pressure on the card to achieve my desired outcome. I lifted the card close to my chest and flicked my wrist out quickly, the heel of my hand ending pointed out to Bobby, my palm open, the card flying. I felt like a magician. The card landed between us, face-up. I could see Bobby’s jaw drop, his mouth hanging open. “Just a lucky practice,” I said. Oh God, what am I doing? I want him to like me.

Bobby pressed his lips together and gazed down at the Mickey Mantle card in his hand. His neck was long and slender. He had a dot of a birthmark just below his right ear which I sometimes stared at across the aisle in our classroom when he wrote in his notebook. “Let’s get the real competition going,” he said.

I bit my lip and nodded. He let out a long sigh. I could feel his breath on my arm. “Okay,” I said; “I’ll say one-two-three, flip! And then we both flip at exactly the same time. Whoever gets heads-up wins the other’s card. And if we tie, then we just do it again until one of us wins.”

“Yeah, I know the rules,” he said. He placed a Mickey Mantle card in his right hand, ready to flip. I really wanted that Mantle card. I did the same, the Roger Maris card in position between my fingertips.

“Hey,” I said, “Don’t bend the card too much when you flip. I don’t want a damaged Mickey Mantle.” Our eyes met. We both grinned. He’s so cute. I imagined what it would be like to be his girlfriend when we got to high school, go to parties as a couple, kiss in a dark corner away from friends. “One-two-three, flip!” I shouted.

A few minutes later, Bobby stood up from the stoop. He placed the three Roger Maris cards he won from me on top of the small stack he had brought over with him. “Sorry,” he said; “I didn’t mean to beat your ass.”

I shrugged; “I must be having a bad flip day. Not like me.”

“Guess so.” He scratched the top of his head; “I heard you were the best.” He pivoted and started to walk away, headed to where he lived across the narrow street. I stayed seated on the top step and watched his slender body move away. When he got to the curb next to my upstairs neighbor’s parked Buick, he turned back to me, “Hey, you like to play cards?”

I raised my eyebrows.

Gin Rummy? I knew about it and that my mother played cards. She loved Gin Rummy, told me she played a lot in the U.S. Navy when she was overseas but I had refused to learn because I hated to do what she wanted me to do unless it was a command. “Um, sure,” I said, smiling at Bobby, “I like Gin Rummy.”

“Want to play a card game after school on Monday?” he asked; “I won’t be around this weekend. But I’ll be here Monday.”

“Yeah. I’ll bring a deck of cards,” he said, and started between the parked cars on the street.

His mother, a big woman wearing a paisley dress hollered out from the fire escape of his second-floor apartment window, just opposite my building. “Bobby,” she called, looking up and down the steep hill we lived on. She spotted him, gestured with her hand, her voice shrill; “Bobby, get upstairs. We’re leavin’ for Rockaway. Ya gotta eat something first.”

He gave me a quick wave over his head, ran across the street to his courtyard, and pushed the front door to his building open with his foot. He hopes I’m still watching him. I mused. Gave up three Roger Maris cards but snagged a date with Bobby Schwartz.

My first experience at developing a winning strategy “on the spot.”

Linda S. Gunther is the author of six suspense novels, her most recent work is titled Death Is A Great Disguiser. Her short stories have also been featured in numerous literary publications.

AT MY AGE BY SHERRI WRIGHT

A LIAR BY BEATE SIGRIDDAUGHTER

THE PEOPLE’S CHAMPION BY DREW RICHMAN