THE PEOPLE’S CHAMPION BY DREW RICHMAN 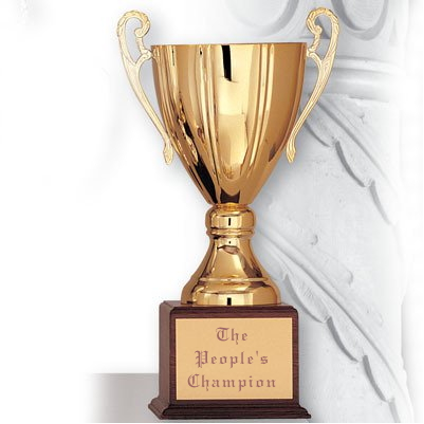 Jerry Bertran looked at the news on the vidscreen. The headlines screamed about the latest stunt that “The Champion” had undertaken just two days before. Free diving to a depth of over eight hundred feet and then resurfacing didn’t seem like such a big deal, he mused. All you needed to do, he thought, is close your eyes and take a deep breath. The rest was easy. Looking at his blood-red hands wrapped in gauze, he once again shook his head and thought that he didn’t feel like “The People’s Champion.” And he remembered how it all started.

When he was eighteen, he was a rebellious thrill-seeking kid. It was fun and he was kinda cool about it. He started with jumping a car. Then two. Then ten, twenty. Buses, end-to-end. Airplanes. Even a 747. He crashed about every third time but it really didn’t matter because he was paid nonetheless. And he gained a certain notoriety and made a few bucks in the processes. After about three years, he realized that he no longer got the adrenaline rush, the thrill, the kicks, of doing a particular stunt. It had become, in effect, a job. A well-paying job to be sure, but just a job. And every stunt had to be bigger, better, more expensive, and more dangerous than the last.

On his twenty-first birthday, he out Evel Knieveled Evel Knievel. Where Knievel had failed to make the Snake River Canyon jump in 1974, Jerry made it look like a waltz in the park. That jump made him wealthy, and more importantly, gave him a national and international audience. A year later he used a rocket-powered sled traveling at four times the speed of sound to launch him and his motorbike some forty-five hundred feet down the road. It was a picture-perfect jump, he was told. And it would have certainly gained him another entry into the Guinness Book of World Records but the bike was flying through the air at about one hundred eighty miles an hour and when the wheels hit the runway, the suspension crumpled like aluminum foil. That jump earned him more than ten million dollars, super stardom, and a long stay in the hospital.

Then the government fell.

I won’t go into the historic collapse of American democracy as it was once envisioned by the Founding Fathers. But during the three years that the ‘crisis’ ensued, Jerry was quietly healing and going through rehab. Two years after that, he was approached by two men in dark suits who ‘requested’ that he accompany them to Washington to have a meeting with the Leader.

When Jerry walked into the People’s House and into the Leader’s office he was, frankly, unimpressed. The Leader was a somewhat pudgy, balding, sixty-year-old guy. And from the way he talked, he sounded like he was from the Midwest. Like Iowa. But there was a fire in his eyes.

“Mr. Bertran,” said the Leader extending his hand, “Welcome to the People’s House. Please have a seat. Can I get you anything? Coffee? Tea? Bottled water? Or perhaps, something a bit stronger?”

“You’re probably wondering why I had you brought here. Well, it’s like this. Since the disruption of the old government and the empowering of the new People’s government, we have realized the need to give the people something to strive for. A challenge to take their minds off of some of the problems your government is now facing. What we’re envisioning is some sort of annual national contest that any man or woman can participate in. The stakes will be high…life and death…”

“Yes, life and death,” continued the Leader; “Each contest will start with, I don’t know, maybe ten or fifteen contestants. The contestant that survives will be given a palatial home, all the money they could ever hope to earn…tax-free I might add, and…the kind of national fame that will be unsurpassed by any actor or athlete in history. The Champion will be the envy of every man, woman, and child in the country.”

“What do you want from me?” asked Bertran.

“To put it simply, Mr. Bertran,” said the Leader, “based on your remarkable talents as a stunt performer, daredevil, and national icon, we want you to be the People’s Champion.”

Bertran scrunched up his face for a second or two and then replied, “Sir, I’m not sure I’m the man for this ‘honor’.”

“Of course you are, Jerry. May I call you Jerry?” beamed the Leader. “You’re just what the doctor ordered. Why don’t you take a few days to think about it and then get back to us? And, while you’re thinking, remember all the money you’ll be making, and the incredible housing with as much staff as you need to get the exposure that will, most certainly, be demanded of you. Any type of food. Liquor. And the women, Jerry. Oh my Gawd, the women will just flock to you like moths to flame.”

In the end, Jerry acquiesced.

The first contest took place two years later at the old Indianapolis Motor Speedway. The press buildup was phenomenal. Every local, major; and minor news, sports, entertainment outlets were present. There were ten contestants including Jerry. This was not a race about speed or the number of laps the car and driver could chalk up. This contest was much simpler—Survival. The cars travelled around the track at close to two hundred miles an hour. At random intervals, in random lanes, at random places in the lanes, a large metal post would thrust up from the ground. The post would either skewer the unfortunate cars and their drivers or the car would run headlong into it. Either way, both were dead. The yellow caution flag would come out as the remains of both the driver and the car were unceremoniously removed. The posts were retracted and the race would continue anew.

Before the race, Jerry’s pit boss suggested that maybe the best course of action for Jerry to take was to drive in the center lane only. Jerry was skeptical and somewhat hesitant, but the pit boss assured him that was the winning ticket. So, Jerry drove in the center lane. Round and around and around for over four hours as the other contestants were, one by one, picked off by the metal posts. And in the end, Jerry was the last car rolling. He was proclaimed ‘The People’s Champion’ by the Leader himself.

And true to the Leader’s word, Jerry was housed in a magnificent mansion—something just a tad larger than Versailles’ seven hundred thousand square feet. Everything he could ever ask for was either already in the house or but a phone call away. He was wined and dined at the best of the best restaurants and clubs. He was seen with all the ‘right’ people. And, as the Leader predicted, the women flocked to his side…and his bed.

The second year’s contest involved flying ancient fighter planes in a figure eight. To add to the excitement, enemy fighter planes tried, and mostly succeeded, in shooting down the weaponless pilots. Again, Jerry’s pit boss suggested that he could confuse the enemy planes if he flew not only around the course, but also in a sine-wave-like manner. Jerry thought it was a crazy idea, but he tried it even so. At the end of three hours, he landed his plane and was proclaimed ‘The People’s Champion’ for the second time.

He won the third, fourth, and fifth years too. Although, at the sixth ‘Race to be the People’s Champion’ as it was now being called, Jerry gave everyone, including himself, a fright. The contest was a mountain bike race down a very steep, very rugged, and exceptionally narrow trail. As the competitors crossed certain extremely narrow portions of the trail it would suddenly ‘give way’ and they would fall to their deaths over the ever-present cliffs. Jerry was rounding such a portion when the bike lost traction. He and the bike hung precariously to the edge of the cliff. Had it not been Jerry’s exceptional steadiness and his ability to balance on the front wheel, he would have surely been a goner.

The Game had, over the past decade, become not only the national pastime, but also a national obsession. There were now hundreds of local and regional contests to see who would compete against Jerry to try to wrest the prize of People’s Champion away from him. So far, all had failed.

This next year would be the tenth anniversary of the Game. The contest was the most incredible ever. Mind-boggling in its scope. A jump from space! Jerry had called the Leader and told him that he was through. “I’m tired. Let someone else be Champion,” Jerry told him.

The Leader informed him that he, Jerry, had no choice in the matter. He would compete and he would win. Again.

And as he stood perched on the threshold of the helium-filled balloon’s gondola, some forty miles above the earth, he realized that the twenty years he had spent doing stunts before he became the Champion, and the ten years since he became the Champion really meant nothing any longer to him, and he suspected, to anyone else…except the Government.

Jumping from an altitude of over forty miles didn’t seem like such a big deal, he mused. All you needed to do, he thought, is close your eyes and take one small step…leave your ‘chute in the gondola, and fall gloriously to earth.

The winner of the first National Public Radio’s Selected Shorts Writing Contest, Mr. Richman’s work has also won contests at Writers of the Future, National Novel Writing Month, and has been featured in Writers and Readers’ Magazine, Blank Cover Press, The Lawrence House Centre for the Arts – Uproar Literary Magazine, among others.

SUSPENSIONS OF LOVE AND DEATH BY DAVID OSGOOD

A LIAR BY BEATE SIGRIDDAUGHTER